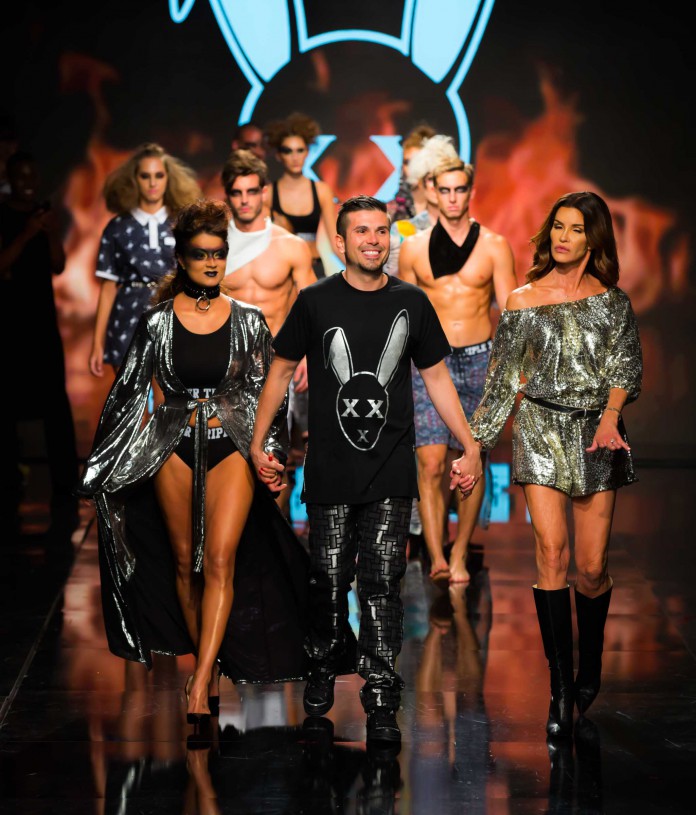 This season marks the evolution of LA Fashion with the platforms move to the most prestigious zip code in the world. Designers did not disappoint the over 1500 nightly guests packing the venue to see the latest creations from the international couture, streetwear and ready to wear brands participating in this seasons Los Angeles Fashion Week edition of Art Hearts Fashion.

Night 2 of Art Hearts Fashion week continued the fashion domination with a 5pm showcase featuring international flavors from across Europe including Charles and Ron and Dair by Odair Pereria joined by up and coming designers Tigers Eye Clothing, AllAlong Apparel, and Wicked Things Boutique.  The 7pm presentation was an explosion of Los Angeles talent with crowd favorite Hale Bob opening the show to a full house of fashion hungry fans followed by an amazing presentation by SIWY Denim and a spicy finale by Latin designers Arzamendi Style and Willfredo Gerardo. The 9pm presentation did not disappoint with a gown take over by designers Fernando Alberto Atelier, Usama Ishtay, Michael Wallace and Adolfo Sanchez. Celebrities attending and walking for the night 2 designers included Daphne Joy, Cassandra Cass, Laith Ashley, Ariscestocrat, Makeup Shayla, Christian Salas Solis, Marla Solis and Jossie Ochoa.

“It is an honor to be here and be a part of Art Hearts that gives back”, – said designer Willfredo Gerardo who showed not just one but two of his collections during the Fashion Week.

“The collection is called The New Hollywood and it is all about what a girl on the red carpet looks like, new young Hollywood is an inspiration”, – said designer  Adolfo Sanchez about his new collection. The collection is a perfect mix of the classic, glamorous old Hollywood and the modern Hollywood vibe. Adolfo used hip hop music for his show and admitted that “it is such a big part of fashion right now”. Not to mention, Adolfo Sanchez dressed Kylie Jenner and it looks like Kim Kardashian might be the next on his list.

Following the children’s collections was a mix of sci-fi sexiness from Dan Richters followed by tribal flavors by Dahil Republic of Couture. Argyle Grant and Koco Blaq rounded up the presentation with resort wear and tropical vibes.

Closing Night of Art Hearts Fashion opened with the next generation of fashion designers from the Art Institute of California and closed with a spectacular presentation by the world’s most talented couture and costume designers. Designers included Luxery by Xandra, Albert Fontanilla, Albert Andrada, Resty Legare, Yas Couture by Elie Madi and Rocky Gathercole. The finale of Art Hearts Fashion was a star-studded extravaganza and an evening for dreams to come true. Christine Devine from Fox Television was on hand to witness several of the Wednesday’s Child alumni walk the runway for Eli Madi. Stars in support of the night included Akon and cast members of the hit shows Basketball Wives and Love and Hip Hop.

Art Hearts Fashion wrapped up 4 days of runway shows and 2 massive parties with over 50 designers and more than double the amount of talent and guests than any other platform in Los Angeles proving that home is wear the heart is. Guest management sponsor Gjests helped make for a smooth check in process to the over 5000 guests that attended the week of events.