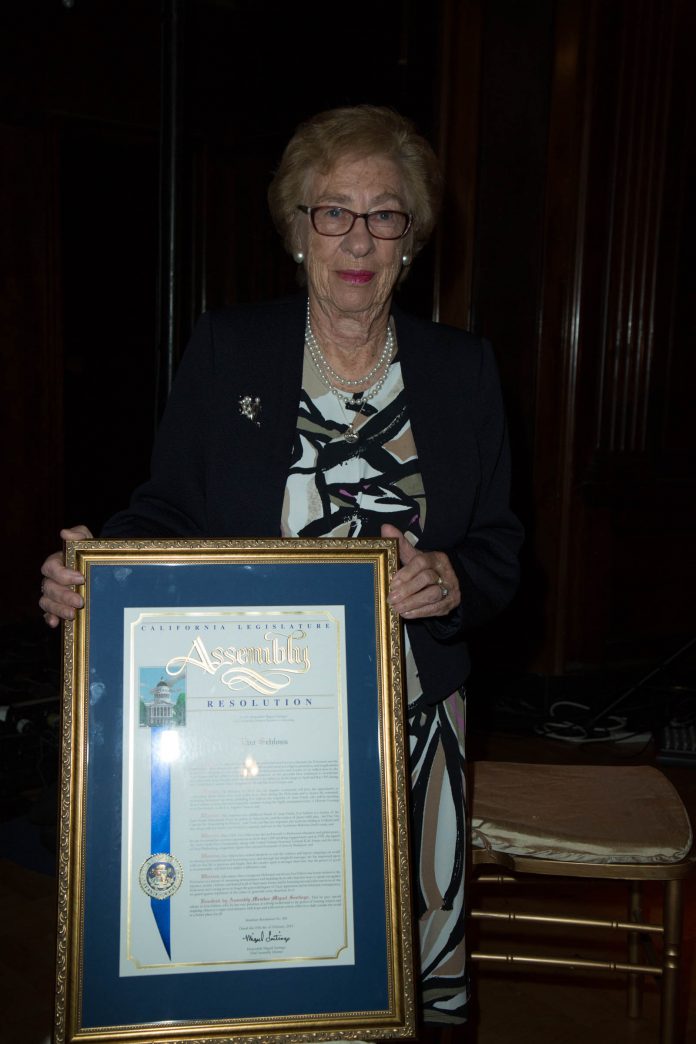 To those who lost their brothers, sisters, and parents in World War II

It was a true evening of hope and inspiration as the step-sister of Anne Frank Eva Schloss presented her book Eva’s Story: A Survivor’s Tale by the Stepsister of Anne Frank written with Evelyn Julia Kent. Eva traveled from London to share her tragic story and sign the books. Eva’s story was supported by the paintings of her brother, Heinz Geiringer, displayed in the Los Angeles Theater.

She had Q&A with the Master Teacher and Champion In Education Erin Gruwell. Other presenters included Editor-in-chief of The Jewish Journal David Suissa, musician Heather Powell, and musicologist Dr. Tiffany Kuo. The event was hosted by Rabbi Moshe Greenwald, the Director of Jewish Center Chabad, Downtown Los Angeles.

She said it was about her experience “… and because the new generation has to learn (about Holocaust – SK), and that’s why there is a lot of bad things happening again in the world, so that’s why I decided I have to speak out and tell people and teach the young people about what has happened and what we have to know to change the world …”, she said about the book and her presentation.

This is not the first time she comes to Los Angeles. “I’ve been before speaking in Los Angeles”, – she admitted to HGM.

Eva’s story is the story of her family and friends (including famous Anne Frank) most of whom died in the Second World War.

Eva spent about a year in the Auschwitz-Birkenau Nazi concentration camps till everyone was liberated by the Russians in 1945. She lost her father and brother in the War. Her mother later married Anne Frank’s father Otto Frank.

Today Eva is not only a successful writer but also the co-founder of the Anne Frank Trust UK.

Check out more at http://www.evaschloss.com/evaslife.htm