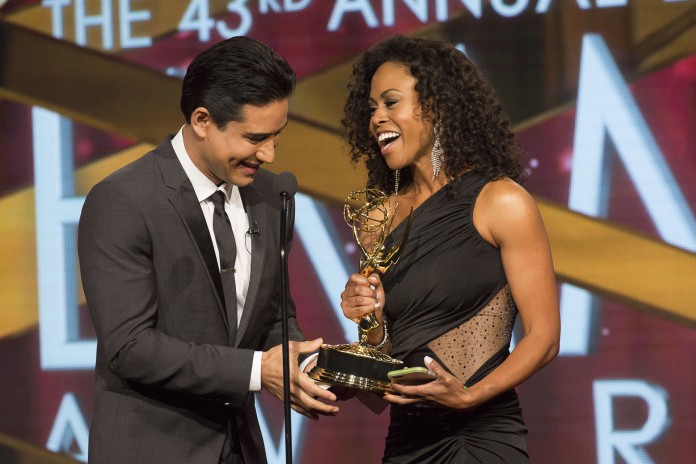 Los Angeles, CA – May 1st, 2016 – The National Academy of Television Arts & Sciences (NATAS) tonight announced the winners of the 43rd Annual Daytime Emmy® Awards in a grand gala held at the Westin Bonaventure Hotel and Suites in downtown Los Angeles, CA.
“We are thrilled to be saluting the best and brightest in what has been a fantastic year for Daytime television,” said Bob Mauro, President, NATAS. “We are blessed with an embarrassment of outstanding nominees and none could shine brighter than this year’s Lifetime Achievement honoree, Sonia Manzano. Over the last forty-plus-years, we, and many of our children, have followed her iconic journey as “Maria” on Sesame Street and the National Academy is thrilled to be able to salute her tonight for her extraordinary achievement.”

The Daytime Emmy® Awards recognize outstanding achievement in all fields of daytime television production and are presented to individuals and programs broadcast from 2:00 a.m. to 6:00 p.m. during the 2015 calendar year.
2 Yangaroo, Inc. provide the entry/judging software for The National Academy of Television Arts & Sciences and is a sponsor of the 43rd Annual Daytime Creative Arts Emmy® Awards.

United Airlines is the official airline of the Daytime Emmy Awards and The National Academy of Television Arts & Sciences.
The 43rd Annual Daytime Emmy Awards is a presentation of the National Academy of Television Arts & Sciences. A breakdown of the awards by network, as compiled by the independent accounting firm of Lutz & Carr, LLP, follows. A full list of all nominees in all categories can be downloaded from our website at www.emmyonline.tv.

About The National Academy of Television Arts & Sciences
The National Academy of Television Arts & Sciences (NATAS) is a professional service organization dedicated to the advancement of the arts and sciences of television and the promotion of creative leadership for artistic, educational and technical achievements within the television industry. It recognizes excellence in television with the coveted Emmy Award for News & Documentary, Sports, Daytime Entertainment, Daytime Creative Arts & Entertainment, Public & Community Service, and Technology & Engineering. NATAS membership consists of over 15,000 broadcast and media professionals represented in 19 regional chapters across the country.

Beyond awards, NATAS has extensive educational programs including Regional Student Television and its Student Award for Excellence for outstanding journalistic work by high school students, as well as scholarships, publications, and major activities for both industry professionals and the viewing public. For more information, please visit the website at www.emmyonline.tv