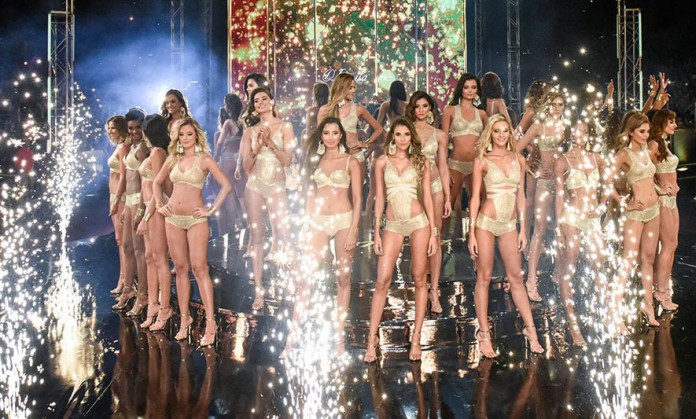 July 2016. The first day of Colombiamoda 2016 set the standard of what promise to be the best edition of this inclusive tradeshow of the Fashion System. The creative atmosphere has come to Medellin, and the innovating proposals stand up in different scenarios of visibility that encourage the creative minds talents of the industry.

Wella Professionals, Max Factor and Sally Hansen, allies that were in charge of the styling on backstage, joined this fashion agenda,   spirited with Cîroc cocktails while the models were getting ready.

Non-Stop Moda a la Colombiana opened the runways circuit that will take place from July 26th to the 28th, with the new and rising talents that delight with innovating stagings where the blend of latin roots and distant worlds create unique concepts of high impact.

Arte de la Palabra (lit. Art of Word) by Mulierr, began this ride. The national brand displayed a collection inspired by Colombian birds. A whole visual experience through the exploration of embroidery techniques and creation of the garments. This illustrated how pieces can become art and be elegant and avant-garde at the same time. On the other hand, Sort Lingerie featured a lingerie collection where the women skin was the main focus. Transparencies played with floral and geometric embroideries, and the satin cuts shaped the woman’s figure.

Along with the program for Afro-Descendants and Indigenous of the United States Agency for International Development (USAID) came the second fashion show of the day, where designer Edwing D’Angelo presented a collection that recall his origins in San Basilio de Palenque. A staging that told the story about the ancient past of this town in a way that is contemporary, brilliant and full of happiness. Summer colors, inspired by the Caribbean Sea, loose silhouettes and breezy fabrics created a collection where the tailoring details were highlighted. This collection relied on native jewelry, designed by Liz Chela

The daily dose of creativity was in charge of the students of Fundación del Área Andina. Inspired by the universe of Star Wars, the brand let the Jedis, members of the Dark Side and space warriors’ accessories to be part the urban life. Renewed and futuristic garments stood up, reflecting the consumer’s mood. This demonstrates that people dresses according to how they feel, their lifestyle and the surroundings.

With Des-Amor (lit. Love Lost), Orozco Clothing captivated the audience. Hand in hand with the program ‘Épica: reto de Innovación’ (lit. Epica: innovation challenge) of Alcaldía de Medellin (Medellin’s Mayor’s Office) and Inexmoda, the story of a love that could not be was told. A unique blend between punk and dandies of late nineteenth century, created the denim collection where laser graphics and digital cloth prints were highlighted. This modern tailoring brand proved that unity is what really makes strength, by creating a partnership between several brands that allowed them to shuttle the public to a unique world and witness an unforgettable show. Dr. Marteensbrought the shoes; Termimoda the denim processes; digital clothing prints were provided by Estampamos; bags were supplied byTigre de Salón; and Coletex was in charge of denim.

After dark romanticism, the Brazilian cheerfulness took the stage with the brand Carmen Steffens, which presented a 360° collection. Here, the public could see from sportswear to casual wear, and also the launching of its new line of beachwear. Seventies inspiration was reflected on the fringes, macrame and braiding; Tahiti and Cuba were present with floral prints, cheerful colors and laser cut details.

At night, all eyes were on the Leonisa fashion show, a brand that celebrated its 60th anniversary with a great visual and dancing show, which paid tribute to the Latin women under the concept “Transparent Intimacy”. Young, fresh, light, and garments with a lot of lace and wireless bras stood up. Transparencies, the influence of sportswear and floral and foliage prints had also a leading role.

Considered as one of the unmissable fashion shows of Colombiamoda, the famous brand Pepa Pombo, closed the first day of the tradeshow. The designer of the brand, Monica Holguin, took us to Rio de Janeiro in the forties, Blooming Rio tells the story of a cosmopolitan woman who decides to spend a summer in the  Copacabana Palace, where music and colors becomes her inspiration. A cheerful collection, where the floral prints, color blocking, and geometric designs appear on the wrapping garments and multifunctional garments that emphasize the woman’s silhouette. Crop Tops, blouses off the shoulder, bermuda shorts and bell-shaped sleeves were emphasized on its design statements.