For The Third Consecutive Year, Women in Motion Has Honored Women At The Cannes Film Festival 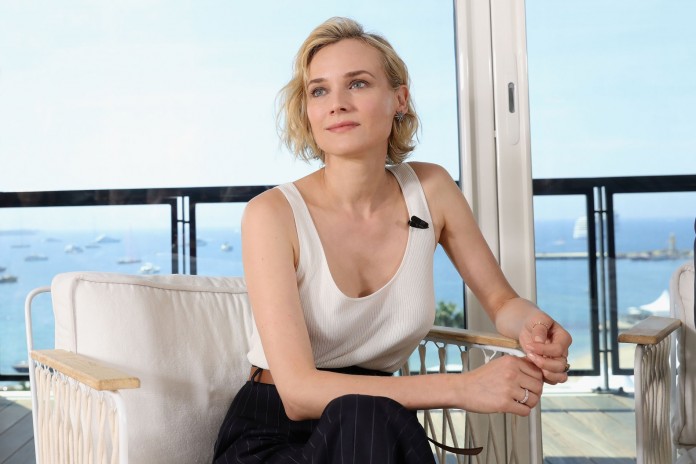 Isabelle Huppert received the Women in Motion Award and honored the director, Maysaloun Hamoud with the Young Talents Award at the official dinner hosted by 200 guests at Place de la Castre, which included Uma Thurman, Jessica Chastain and Catherine Deneuve.

Women in Motion welcomed more than 300 guests to discussions on the role of women in cinema with Robin Wright, Isabelle Huppert, Yang Yang, Salma Hayek Pinault, Costa-Gavras, Kaouther Ben Hania and Diane Kruger, who was presented with the Best Actress Prize at the 70th Festival de Cannes for her interpretation in In the fade by Fatih Akin.

Once again this year, Women in Motion opened the doors of the Kering suite on the 7th floor of the Majestic Barrière Hotel to more than 300 guests from the world of film and media to discuss the contribution and representation of women in the film industry during its Talks program, an event that have become a must at the Cannes Film Festival.

This season opened with a first Talk in the presence of the actress Robin Wright, known in particular as Claire Underwood in House of Cards, for which she finds herself for the first time behind the camera. While the disparities between women and men remain in cinema, Robin Wright has, among other things, come to defend the representation of women filmmakers by requesting industry professionals to continue giving them the floor, especially to the younger ones: “On must encourage the younger generation to express themselves. Feminism means equality: equal pay for equal work. Now things have to move on the side of the decision-makers and film financiers who are mostly men. It is time for things to change and for the new generation to take on this subject.”

In parallel to the presentation of the two films in which she is currently appearing and which competed in the Official Selection, the international icon Isabelle Huppert expressed her position on the place of women in cinema. She is an inspiration to women the world over and has observed the major role women play before and behind the camera, for example in the United States where some of them “run studios and are courageous and very enterprising women.” So there is no path cut out for them, but “by being forced to take the byways can bring women greater freedom.”

Two days later, the actor Yang Yang also spoke for a Talk centered on the representation of women on screen, as well as on women’s cinema, which he perceives as having a finer sensitivity to emotions. During this Talk, the Chinese actor said he was privileged to be able to participate in events like Women in Motion, and “to give his energy to encourage more people to respect women’s rights and interests” so as to “bring this positive energy to our people.”

During the second week of the fortnight, Women in Motion brought together the actress, producer and board member of the Kering Foundation, Salma Hayek Pinault, the filmmaker and president of the Cinémathèque Française, Costa-Gavras, and the young director selected by Un Certain Regard, Kaouther Ben Hania. Women are not the only ones to be aware of the disparities in treatment, as evidenced by the presence of Costa-Gavras who came to share his experience of cinema where women can be regarded as “second-class people”, and “are treated differently, both at the level of salary and by not being able to fully exercise their profession as filmmaker.”  This Talk, organized by the Kering Foundation and more broadly centered on violence against women, found a particular echo in the film by Kaouther Ben Hania, who “wanted to make this film inspired by a true story, from the point of view of the justice and the courage of women. It’s David and Goliath, because it’s so difficult to prosecute assailants when they’re supposed to represent the law. It’s like going through a second rape!” Courage acknowledged by Salma Hayek Pinault, for whom it is necessary to continue to “fight so that this violence, which takes on multiple faces around the world, is never again associated with the word ‘normal’“, and in particular through the cinema that serves to “create an audience, and give opportunity to change attitudes.”

The third Women in Motion Talks ended on a note of optimism with actress Diane Kruger, who was presented with the Best Actress Prize for her powerful interpretation of a woman grieving and seeking revenge after having lost her beloved son and husband in In the fade, Fatih Akin’s latest film: “Even if it’s still incredibly difficult to occupy a place, they manage more and more to create their own space, and each one must do it, and demand, for example, that the actresses be paid the same as the actors!”  A space that allows the best way to put “female characters at the center, not at the service of male roles.”

On Sunday May 21st 2017, the official Women in Motion dinner that’s now become a tradition was held at Place de la Castre. On this occasion, François-Henri Pinault, Pierre Lescure, the President of the Cannes Film Festival, Thierry Frémaux, the General Delegate of the Cannes Film Festival, presented the Women in Motion Award to the outstanding Isabelle Huppert for her creative boldness, career, and her ability to inspire new generations of talent. For the Young Talents Award, Isabelle Huppert chose to honor the director, Maysaloun Hamoud for In Between (Bar Bahar), her first feature film that follows the daily life of three young Palestinian women living in Tel Aviv, who are divided between their desire for independence and their family traditions.

Women in Motion will continue to highlight the women of the 7th art throughout the year. A new Talk will be organized in Hikarie (Japan) on June 17th as part of the Women in Society event organized by Elle Japan, which will include the director Naomi Kawase, who was in the Official Competition at the Cannes Film Festival. The presence of Women in Motion on the international scene will also be intensified thanks to the two-year partnership signed with UniFrance announced on May 9th, which will allow Women in Motion to be part of a program of international events to be revealed shortly.

About Women in Motion
Women in Motion sets out to showcase the contribution of women to the film industry, whether in front of the camera or behind it. Launched in 2015 by Kering, in partnership with the Festival de Cannes, Women in Motion is an integral part of the Festival’s official programme. The initiative is based on two pillars: Talks open to journalists and industry professionals which give major figures the opportunity to compare and contrast their experiences and viewpoints around the question of women’s contribution to cinema, and to pool their recommendations for greater representation within the industry. Two Women in Motion Awards are presented each year, one to an inspiring figure who embodies the programme’s values, and another to a young film industry professional, who receives funding support for cinematographic projects.