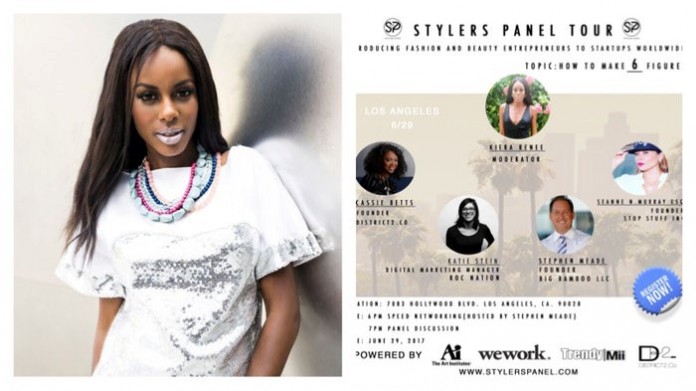 Los Angeles – Kiera Renee, a Los Angeles female Entrepreneur and Executive Producer of “Stylers Panel Tour” used the Uber ride-sharing service to produce a 4-city tour! Kiera, came up with the idea to drive Uber and use it as a way to connect and network with the residents and transplants of Los Angeles. Over the course of 1 year, Kiera was able to connect with over 800 people and from it she was able to leverage those contacts to help her produce a 4 city tour that highlights the work those people and their brands.

The Stylers Panel Tour is a platform that introduces Fashion and Beauty Entrepreneurs to Founders of successful businesses and has panel discussions that gives free advice on branding, digital marketing and business development. The Los Angeles event on June 29th consists of a panel full of passengers from Kiera’s Uber experiment. Katie Stein from Roc Nation, Stephen Meade, Founder of Big Bamboo LLC and Seanne Murray, Founder of Stop Stuff all agreed to speak at Stylers Panel after their ride with Kiera.

Stylers Panel will travel from Los Angeles to Philadelphia, New York and Washington D.C and feature guest speakers as well as the businesses and products all discovered during a ride-sharing experience.

The Stylers Panel Tour connects Fashion and Beauty Influencers and Entrepreneurs in Los Angeles, Philadelphia, Washington D.C and New York and allows them to connect while gaining the resources needed to develop a well rounded brand! Join us on June 29th at 7083 Hollywood Blvd for the Kick-Off of the Stylers Panel Tour!! This is the premiere destination for Fashion and Beauty Entrepreneurs and Small Business Owners to connect and gain FREE knowledge needed to build profitable brands. For the first time, we will host a Speed Networking course, hosted by Stephen Meade, that teaches Entrepreneurs how to pitch themselves and their businesses in 60 Seconds!

Kiera Renee is a Media Maven and Founder of TrendyMii, a multimedia outlet prided on the cultivation of Entrepreneurs. Kiera Renee graduated from California State University Northridge with a Bachelor’s Degree in Broadcast Journalism and Associates Degree in Communications.

Kiera had no idea that her career would go down a path of event production, but the gift had always been brewing within. Kiera got the production bug in early adolescence. In High School, Kiera was very active on campus producing Homecoming productions. She was so versed at it that by her Sophomore year she was given full authority over all decision-making regarding such productions. She went on to lead her graduating class to 3 of 4 first place finishes.

Flash-forward 8 years to 2013, Kiera’s launched her first production, an Award Show, Pass The Torch. She presented an Achievement Award to the legendary Aundrae Russell, Program Director of 102.3 KJLH. The success of the event led Ms. Renee to be recognized by The Real Talk Radio Show as “Entrepreneur to Watch 2014.”

With this newfound title and being a struggling entrepreneur in Los Angeles, Kiera was forced to acquire the ability to produce events with no budget.

She was able to successfully land partnerships with buildings, gain sponsors and effectively develop lasting relationships with industry professionals.

In 2014 Kiera launched Stylers Panel, an interactive panel that brings out top industry Executives in Marketing, Branding, PR and Finance to share their success stories and give tip and tricks to managing a small business on a tight budget. The birth of this production evolved into her monthly networking mixer Stylers Panel: The Melrose Experience Edition. The Melrose Experience has connected over 1,000 professionals since it’s launch in January 2016.

Kiera Renee is still a young Entrepreneur herself, nevertheless, she understands that her purpose in life is to help build up as many entrepreneurs as God will allow her. In the future Kiera hopes to teach all across the country and launch impactful events that change lives.