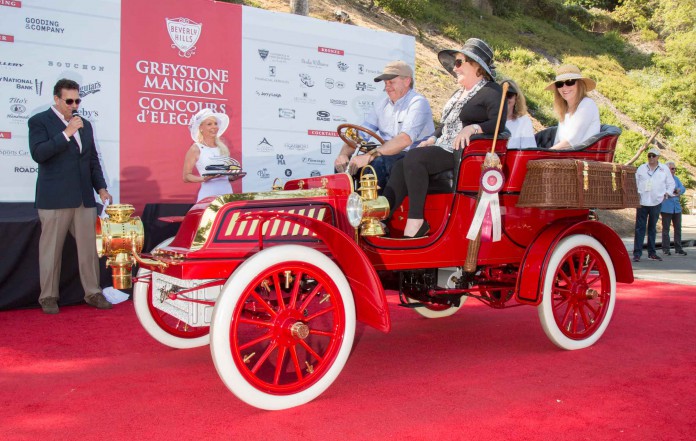 What happens when the best car show takes place in the historic Doheny Greystone Estate with over a dozen films shot there? That’s when you have the most successful event in Beverly Hills.

On May 1st a sold out crowd of thousands of auto aficionados and urban explorers gathered at Greystone Mansion for this elegant event where these exceptional automobiles and more than 20 unique motorcycles graced the historic 18-acre estate in Beverly Hills. A 1939 Brough Superior SS 80 was named Best Vintage Motorcycle, a 1980 BMWR100 was named Best Custom Motorcycle and a 1954 BMW R 51/3 was named Best Preservation Motorcycle.

“This is the 7th year of the event and was easily our most successful ever. We had the honor of receiving the most applications we have ever had for potential exhibitors. We ultimately showcased 135 world class cars and 20 motorcycles. We thank our attendees and gracious sponsors for all of their support.” Local artist Richard Pietruska, a highly respected professor at the Art Center College of Design in Pasadena, was commissioned to create custom Greystone Mansion Concours d’Elegance signature awards. The sculptured awards capture the essence of speed and movement of the more exotic automobiles of the past as well as the present. The forms are exaggerated and curved to dramatize the unique character and quality of each automobile as it flows through space.

The Pietruska awards were given in 18 Best of Class categories and in two Best of Show categories. Nine Special Automobile Awards and three Motorcycle Awards were presented as well. Entries are assessed per the “French” method of judging which emphasizes the overall impression of the given vehicle, taking into account such factors as originality, authenticity, design, styling, and elegance.
In addition to the Best of Show awards, other concours winners included a 1967 Alfa Romeo GTA/P 1600 Corsa, which received the Fédération Internationale des Véhicules Anciens (FIVA) Preservation Award; a 1961 Ferrari 250 SWB Berlinetta received the HVA “This Car Matters” Award; a 1931 Chrysler Imperial CG Dual Cowl Phaeton was the Mayor’s Choice recipient; and, the Spirit of Greystone Award was presented to a 1932 Lincoln KB Roadster.
For the first time, 2016 Greystone Mansion Concours d’Elegance offered a Preservation Class category verifying that each car in this class is original and unrestored. The Preservation Class award went to a 1967 Porsche, 911S. Other world class automobiles were featured in categories for Alfa Romeo, Cadillac-LaSalle, Corvette, Ferrari, Ford, Grand Touring, Jaguar, Mercedes-Benz, Morgan, Packard, Porsche, Post-war American, Post-war British, Pre-war American, Pre-war European, Shelby and Special Interest.
Guests of this premier Southern California concours event also enjoyed gourmet food, libations from Tito’s, Stella Artois and Asombroso Fine Tequila and desserts by Sugarfina. Guests also enjoyed expert-led lectures with Peyman Salehi, Senior Vice President of Private Client Services at City National Bank, and David Gooding, President of Gooding & Company, one of the world’s foremost automotive auction companies, and British Wheeler Dealer television personality Mike Brewer. Unique access to the interior of Greystone Mansion provided guests with a glimpse of rarely-seen rooms and the mansion’s first floor became a shopper’s delight, with a new automotive artist display upstairs.