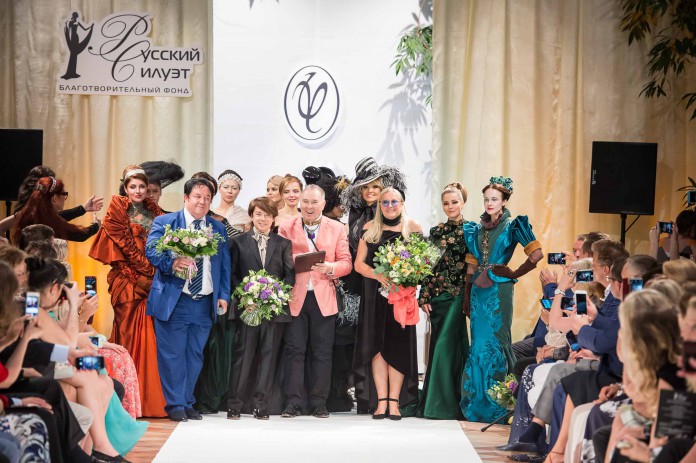 On June 27th media, talent and VIP guests joined the organizers of The Russian Silhouette Charity Foundation to celebrate The 38th Moscow International Film Festival at Zurab Tsereteli Art gallery. The theme of this big event was Big Cinema, Stars for Stars.

The top Moscow socialites, as well as Hollywood stars, gathered for the anniversary celebration that night. As always, Nikita Mikhalkov, the president of  Moscow International Film Festival; Tatyana Mikhalkova, the President of The Russian Silhouette Charity Foundation, and Alexander Mitroshenkov, the founder of The Russian Silhouette Charity Foundation, greeted the guests who showed up to support the fashion show.

For the past 20 years Russian Silhouette exists within Moscow cinemaforum. Over the years, Russian designers and famous actresses who demonstrated their collections have been welcomed by Pierre Richard, Jon Voight, Jack Nickolson, Sean Penn, Peta Wilson, Woody Harelsen, Gina Lollobrigida, Emir Kusturica, Jean-Jacques Annaud, Jacqueline Bisset, and other celebrity guests. The event has always been hosted by the most influential and well recognized people from fashion and art industry.

The honored guests of the event who also appeared to be the jury of the show had a chance to meet beautiful Russian actresses and designers. The jury consisted of leading members of fashion publications and other PR programs.

This year guests had a chance to see the runway shows of young fashion designers. Angelika Kirillina with the collection called Bohemian Yakutia, the finalist of Russian Silhouette 2015 and participant of Moscow Fashion Week, showcased her collection accompanied by the music composed by talented Yuliana Krivoshapkina, a renounced musical artist from Saha Republic (Yakutia). Other designers included Anna Bulatova, the student of  MGUDT, who represented her collection Sound Geometry, and Anna Rachkova, a member of Zaytsev Academy, who showed the collection Apriori.

The grand finale of the event was marked by the fashion show of the most famous Russian designer Valentin Yudashkin.

Valentin Udashkin, famous Russian fashion designer, National artist of The Russian Federation, the renowned Member of Arts of The Russian Federation, Member of Russia’s Fashion Federation and a prêt-a-porte, France; Chavalier of the French Republic for great achievements in Art and Literature, has an order of Honored Legion. His fashion garments are exhibited at Louvre, in California Museum of Fashion, in Historic Museum of Moscow and the Metropolitan Museum in New York. His garments were shown in Paris, Milan, New York and other fashion house capitals. Valentin Yudashkin House of Fashion has been succeeded over 25 years and has already conquered hearts of many fashionistas all over the world.

Natalia Oreiro, an Uruguayan movie star, was invited as a special guest as well.

DJ’s S-Brothers- S, an electrifying and famous DJ band, entertained the guests and created the most enticing and energetic atmosphere. The renounced musical artist Valeria was singing to congratulate the guests performing a fragment from her show London – Moscow. Also, folk singer Zara, Russian and Belorussian singer Angelika Agurbash, and the finalist of Voice- Children Tv-show Lora Grigorieva performed at the event as well.

The night’s entertainment was hosted by Tatyana Savina.