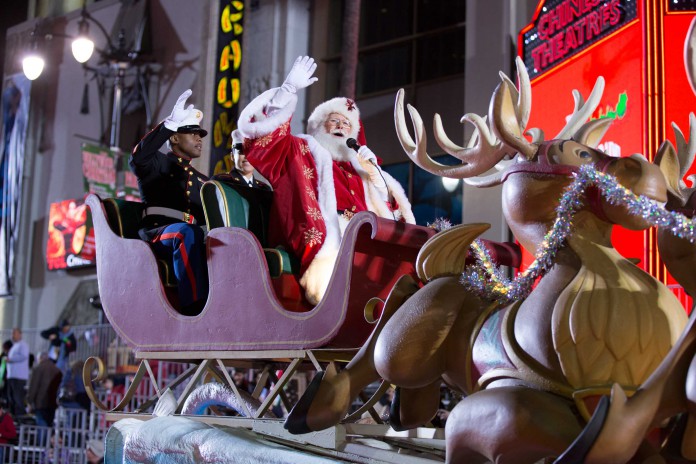 The parade, which features the Marine Toys for Tots program, and is essential in providing gifts to less fortunate children everywhere particularly during the holiday season, will also air to more than one million American servicemen and women worldwide on American Forces Network.  An American tradition, the parade annually attracts more than one million in attendance, and features larger than life inflatable character balloons, award-winning bands, colorful equestrians, ornate floats, popular characters/novelties, celebrity filled cars and, of course, Santa Claus!

About The Parade’s Former Grand Marshals in This Year’s Parade:

Mickey Mouse served as Grand Marshal of the Hollywood Christmas Parade with his partner Minnie Mouse in 1986.  Come on everyone, all together now: “M-I-C-K-E-Y, M-O-U-S-E!” That familiar, fun-filled song spells more than eight decades of smiles and laughter.  One of the world’s most beloved personalities, Mickey Mouse made his screen debut on November 18, 1928, as star of the first synchronized sound cartoon, Steamboat Willie, at the Colony Theatre in New York.  Mickey has become an international personality whose success laid the foundation upon which Walt Disney built his creative organization.  Besides being the personification of everything Disney, Mickey is one of the most enduring personalities of our culture and times.  His beaming face is recognized around the globe, and his endearing personality has captured the imagination of generations, spanning two centuries. Today, Mickey can be seen at Disney theme parks around the world, in beloved merchandise from plush to clothing, on Disney Channel in the Emmy®-winning new Mickey Mouse cartoon shorts, and on Disney Junior on Mickey Mouse Clubhouse.  Starting in 2017, Disney Junior will debut a new series, Mickey and the Roadster Racers.  One of the finest tributes to Mickey was given by Walt Disney himself when, on the first episode of his weekly TV show, Disneyland, Walt said, “I hope we never lose sight of one thing…that it was all started by a mouse.” Forever let us hold his banner high!

Larry King served as Grand Marshal of the Hollywood Christmas Parade in 2010.  During the course of his almost 60-year career, Larry King, the Peabody and Emmy award-winning broadcaster has interviewed more than 50,000 people.  In 2012, after 27 years at CNN, Larry King partnered with Mexican businessman Carlos Slim to create Ora TV, a digital network and production company.  King is currently the host of “Larry King Now” and “PoliticKING with Larry King,” produced and distributed by Ora TV.  King started his career in 1957 as a disc jockey at WAHR (now WMBM) in Miami where he hosted two afternoon newscasts and a sportscast.  In 1978, he hosted the first-ever live national call-in radio show and became known for his conversational style of interviewing and diverse roster of news-making guests.  In June 1985, King was hired by Ted Turner and spent 25 years as host of CNN’s “Larry King Live.”  King’s interviews made headlines – and sometimes history – with some of the biggest newsmakers in politics, business, entertainment, sports and religion.  His high-profile interviews have included every president since Richard Nixon, hard-to-get conversations with Marlon Brando, Johnny Carson, Al Pacino, Frank Sinatra, Barbra Streisand, Elizabeth Taylor, Sophia Loren, Brad Pitt, and Angelina Jolie; and notable newsmakers like Hillary Clinton, Mikhail Gorbachev, Billy Graham, Audrey Hepburn, John F. Kennedy, Jr., Nancy Reagan and Oprah Winfrey.  He’s interviewed world leaders from Yasser Arafat, King Hussein of Jordan, General Colin Powell, His Holiness The Dalai Lama, Michelle Obama, Iranian President Mahmoud Ahmadinejad, and Shimon Peres.  In 1992, King won the Peabody Award for excellence in broadcasting.  King also moderated the famed NAFTA debate between then-Vice President Al Gore and Ross Perot in 1993, which smashed cable industry ratings records at the time, reaching more than 16.3 million viewers. He is the true pioneer of the media industry who changed the landscape of radio, cable, and television news. He’s also led the transition to the digital space by creating Ora TV, his digital network and production studio which is home to his online shows, the Emmy-nominated “Larry King Now” and “PoliticKING with Larry King” which air daily on www.ora.tv. Currently in its fifth season, Emmy-nominated “Larry King Now” includes interviews with newsmakers and tastemakers like Oprah Winfrey, Celine Dion, His Holiness The Dalai Lama, Harrison Ford, Julia Louis-Dreyfus, Morgan Freeman, and more.  “PoliticKING with Larry King” has featured prominent interviews with Vice President Dick Cheney, Democratic Presidential Candidate Bernie Sanders, Dr. Ben Carson, and more.  In October 2014, along with his wife Shawn, the two launched their weekly PodcastOne show “Back & Forth with Shawn and Larry King.”  The King’s have also recently released their own luxury home goods line ‘Sleep Like a King,’ which is available at www.sleeplikeaking.com.  King has been inducted into five of the nation’s leading broadcasting halls of fame and is the recipient of the prestigious Allen H. Neuharth Award for Excellence in Journalism.  In September 2011, he was awarded a Lifetime Achievement Emmy from the National Academy of Television Arts and Sciences.  In addition to his numerous broadcast credits and awards, King founded the Larry King Cardiac Foundation in 1988, which has raised more than $15 million and provided life-saving cardiac procedures for more than 1500 people and provided 100,000 heart screenings for needy children and adults.  King also established a $1 million journalism scholarship at George Washington University’s School of Media and Affairs for students from disadvantaged backgrounds.  King has been a recipient of honorary degrees from George Washington University, the New England Institute of Technology, Brooklyn College, the Pratt Institute, the University of New York and Columbia School of Medicine, among others.  He is an avid and respect baseball fan, regularly seen sitting behind home base at Los Angeles Dodgers games.  King has appeared in 29 movies and written 19 books.  He currently resides in Beverly Hills, CA with his wife Shawn and two of his children, Chance (17) and Cannon (16).

Louis Gossett Jr. served as Grand Marshal of the Hollywood Christmas Parade in 1994.  Gossett was born in Brooklyn, New York, in 1936.  Though invited to join the New York Knicks in the late ‘50s, Gossett decided instead to pursue an acting career, making his Broadway debut at the age of 17, in the production, Take a Giant Step. In 1959, Gossett was featured alongside Sidney Poitier and Ruby Dee in Lorraine Hansberry’s, A Raisin in the Sun.  After almost six decades of acting, Louis Gossett Jr. has appeared in over 350 theatre, film and television titles including:  Skin Game, Travels with My Aunt, The Laughing Policeman, The Deep, Jaws 3-D, Enemy Mine, the Iron Eagle series, and Toy Soldiers.  In recognition of his talents, he has received numerous acting awards including an Academy Award for his unforgettable performance as Gunnery Sgt. Emil Foley in An Officer and a Gentleman—the first African American male to win a supporting role.  He also earned an Emmy Award for his portrayal of Fiddler in Roots.  Although Gossett is still working in films and television, with recent roles on Madam Secretary, the BET mini-series The Book of Negroes, and a recurring role in the CBS-TV series, Extant, he is primarily dedicating the last quadrant of his life to an all-out conscious offensive against racism, violence, ignorance and social apathy. As such, Gossett founded Louis Gossett Jr’s Eracism Foundation (www.eracismfoundation.org) to support this quest.

Robert Wagner served as Grand Marshal of the Hollywood Christmas Parade, along with his late wife, Natalie Wood, in 1979.  One of the most popular and successful stars in the entertainment industry, Robert Wagner’s career has spanned over 60 years.  With a lengthy list of prolific films and television shows, along with authoring multiple best-selling books, Wagner encapsulates what it truly means to be a titan of the entertainment industry.  Perhaps best known for his roles as Jonathan Hart on Hart to Hart and Number Two in the Austin Powers franchise, Wagner first started out his career under contract with 20th Century Fox.  From there, he went on to star in several films, including With a Song in My Heart, Prince Valiant, A Kiss Before Dying, and The Mountain, co-starring opposite Spencer Tracy.  In the early 1970s, he produced and starred in the television movie Madame Sin with Bette Davis and starred alongside his then-wife, Natalie Wood, in the television movie The Affair.  Soon after, he starred in The Towering Inferno with of the biggest names in Hollywood, including Steve McQueen, Paul Newman and Faye Dunaway. After starring in a string of successful television shows, he experienced his biggest television success with the show Hart to Hart in 1979 to 1984, for which he was nominated for four Golden Globe Awards for Best Performance by an Actor in a Television Series Drama.  In the late 1990s, Wagner appeared on the big screen in the role of “Number Two,” the villainous henchman to Dr. Evil in all three of the Austin Powers films, starring Mike Myers.  Additionally, he toured the U.S. with his wife, Jill St. John, breaking house records starring on stage in A.R. Gurney’s play, Love Letters, including a sold-out three-week engagement at the Royal George Theater in Chicago.  In the fall of 2008, Wagner released his memoir, “Pieces of My Heart,” which debuted at #3 on the New York Times Bestseller List. The book provides an inside look at his life and career, from his days as a teen caddying for Clark Gable, to his friendships with some of the biggest Hollywood names of our time.  To follow up his autobiography, Wagner wrote and released “You Must Remember This:  Life and Style in Hollywood’s Golden Age.”  His latest book, “I Loved Her in the Movies” was released on November 15, 2016.  The book chronicles his personal and professional relationships with several of his leading ladies throughout the years.