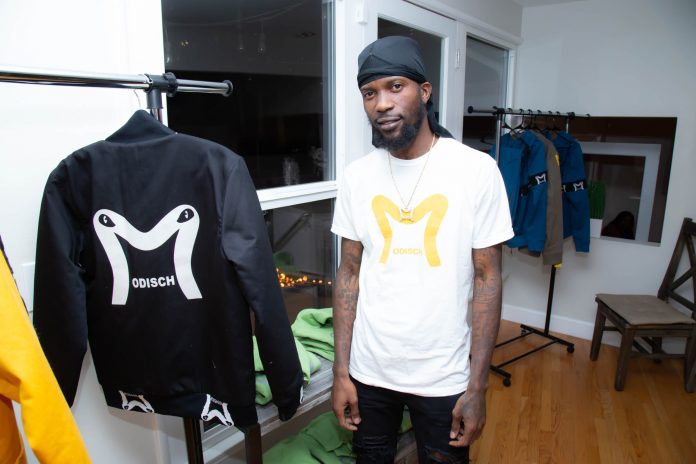 The private mansion event and fashion showcase organized by Modisch and its founder Tay Gaye took place on December 13 in Hollywood Hills. Modisch is a unique clothing line created by African immigrant and Philly-based designer Tay: its fancy and sporty pieces are worn by both ordinary people and celebs like 21 Savage.

The event was a mix of a fashion showcase, art performance and young Hollywood style mansion party. All guests had a chance to see how the designer was making a hoodie from scratch. After the hoodie was sewed, artist John Born painted a picture right on it to make it look even better.

HGM talked to Tay Gaye about his career and clothing line: “I was born and raised in Liberia that’s where I started making clothes, in Africa, when I was seven. My Dad passed away but, in the village, where I’m from, he was a popular designer. When he passed, my older sister took over the business: she opened a tailor shop, and as a kid growing up that’s where I used to be every day…

When I moved to the US in 2000, I was trying to figure my way around, it was very difficult because I didn’t really know anyone here, it was just me, my older sister and my cousin.

When I was in school, we had so many classes, and I was that one person who was making clothes, and it was shocking for many people that a kid of my age could make that stuff from scratch. I even told my teachers how to do certain things. I started making clothes for my close friends. At the end of high school, I started making my own jeans and I had my own brand. I had a son and took a break from college, that’s when I started Modisch. Modisch means fashion in German. I got a graphic designer to put a logo together, I started t-shirts: I was doing animal prints, and at that time animal print was popular and a lot of brands would use animal print. I was one of the first brands doing this, and I had celebrities like French Montana buying my staff. Basically, this is how I built my brand. I do show cases like this one to show people how to really do this just for people to believe when I am doing this, I put my heart and passion”.