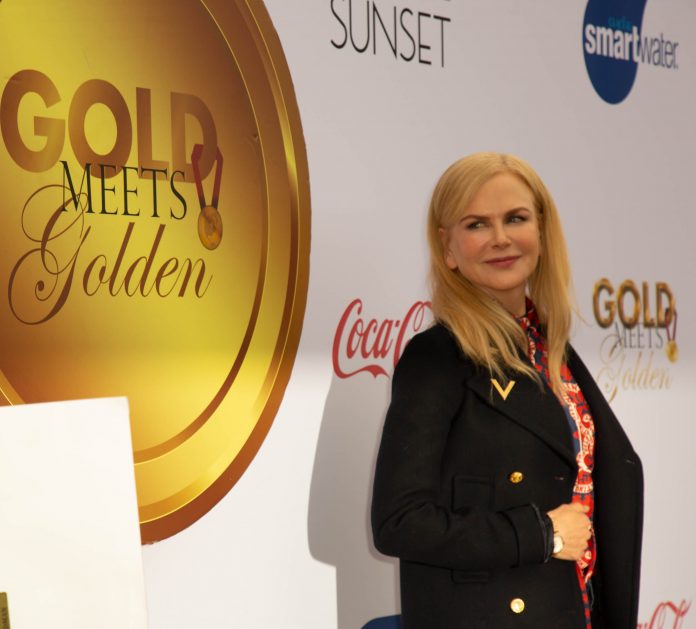 On Saturday January 5th tons of celebrities and Olympic athletes gathered at the House on Sunset Blvd for the annual Gold Meets Golden pre-awards party hosted by Nicole Kidman.

The aptly colored gold carpet was filled with celebs like Amy Adams who is up for two nominations tonight, Octavia Spencer, Chrissy Metz, Jessica Chastain and more. Hollywood Glam got exclusive interviews with some of the celebs and athletes in the video below!

The event is held every year to raise awareness for sports related causes bringing together athletes and Hollywood celebrities to kick off awards season!

It was interesting to hear some of the athletes weigh in on LA’s Olympic games coming up in 2028 and you can see more in the video below. Michelle Kwan spoke to Hollywood Glam about her style and showed off her gold detailing on her look to keep with the theme! There were so many great looks and creative styles for the event. Nicole Kidman was wearing a navy-blue military style jacket and carrying a Gucci bag for the cold LA day. Jessica Chastain wore a Burberry set and Amy Adams opted for an all-white dress with a cute matching purse. Octavia Spencer showed up looking chic and laid back in a black suit jacket and Louis Vuitton bag. She talked about her look for the big night as well so keep watching to hear what she thinks of her awards night outfit!