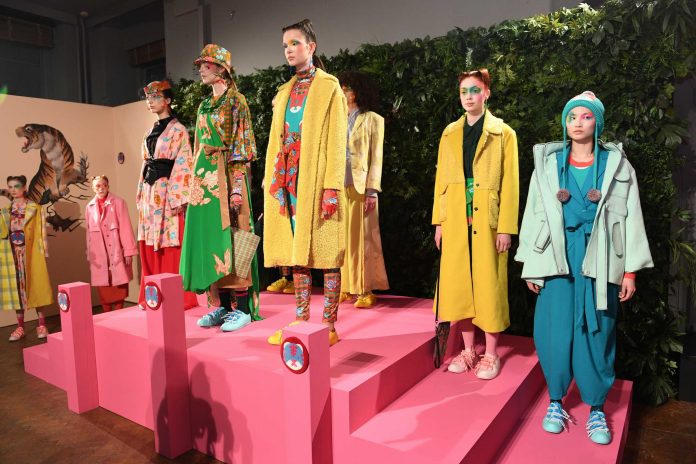 The Fashion presentation and cocktail reception, which took place on the 15thFebruary at London’s old Central St Martin’s building, attracted more than 600buyers, press, industry professionals and media representatives. The four designers showcased during the presentation were Doriskath by Doris Kath Chan, HOUSE OF V by Cynthia Mak, LOOM LOOP by Polly Ho and YeungChin by Yeung Chin.

Together, the designers presented Hong Kong’s avant garde fashion creativity to British and International industry elites including Business of Fashion, Women’s Wear Daily, Elle UK and Love as well as several influencers and VIP’s that included Siobhan Bell, Bea Beards worth and Izzy B Phillips (Black Honey). The presentation incorporated various elements such as art installations, drama and performance art, to highlight the multi-faceted creativity of Hong Kong fashion.

Doris Kath Chan is a talented designer with a degree in Fashion Design Womenswear from Central Saint Martin’s College of Arts and Design in London. With her innovative fashion sense and rich industry experience, Ms Chan is frequently interviewed at major fashion shows and events both internationally and locally, and her signature design has been well received by international media. DORISKATH is a custom wedding and evening gown label that may expand into ready-to-wear collections.

“M.E.” is inspired by the “mirror stage” concept developed by the French psychologist Jacques Lacan. He believed that infants recognize themselves in a mirror, which induces a perception that might be a twisted self-perception. “M.E.” is an elaboration of the contrast between this imaginary projection and the real self – which avoids stereotypes but combines beautifully both feminine and masculine design elements.

Born in Hong Kong and with an international upbringing, Cynthia Mak graduated with distinction from the Central Saint Martins College of Arts and Design in London. Her final-year collection garnered praise from Vogue Italy, which called her one of the “New Talents” to watch out for. Ms Mak has worked at international brands such as Alexander McQueen and Vivienne Westwood, and currently collaborates with HOUSE OF V on a range of innovative designs.

“The New Winter Manual” commemorates the renowned British contemporary artist Damien Hirst and is inspired by his iconic series of spot paintings. The collection depicts the perfect interaction among random colors — which the artist considers the most fundamental in any kind of art — incorporating a series of colorful round buttons to make the simple and minimalistic silhouette more dimensional.

Designer Polly Ho graduated in Arts and Design from the Hong Kong Polytechnic University and the University of Central England. She established LOOM LOOP after her Guangdong trip on which she discovered an extant fabric “Canton Silk”. Ms. Ho was honored with the Design for Asia Award 2015 (Bronze), Perspective’s 40 under 40 Award and HKDA Global Design Awards (Silver and Hong Kong Best) in 2016. She presented her collections at Tokyo Fashion Week from 2015 to 2017, and New York Fashion Week in February 2016 and 2017.Autumn/Winter 2019 marks her debut collection at London Fashion Week.

Hong Kong is unique and fascinating for its exciting fusion of Eastern and Western, ancient and modern cultures. “Concrete Jungle” was inspired by a unique Chinese symbol, the tiger, which often features in traditional Chinese architecture in Hong Kong. In antiquity, tigers were often painted going uphill and downhill, reflecting the belief that climbing tigers symbolize wealth while descending tigers can ward off evil spirits and bring peace. This collection aims to highlight the unique “East-Meets-West” culture of Hong Kong.

Yeung Chin obtained his masters in Fashion Design from the University of Westminster in London. He won a Special Mention Award at the 2003 Hong Kong Young Fashion Designers’ Contest (YDC) and established his brand YEUNG CHIN in 2013. The designer presented his collections at fashion week events in Milan, Paris, New York, Tokyo, Shanghai and Beijing from 2015 to 2017 and held exhibitions at the UK Cheers Exhibition, Singapore Design Centre and Hong Kong Asia Society Gallery, among others.