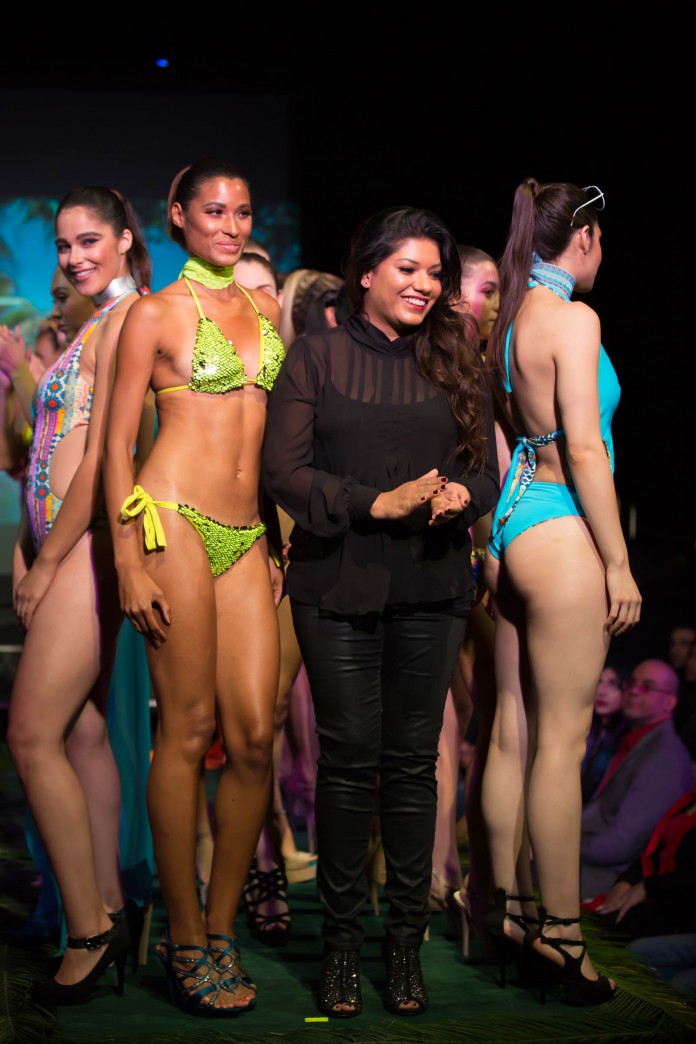 Wednesday Night in downtown Los Angeles designer Monique Deptula of Versa Swimwear presented her latest collection to an intimate crowd at the Globe theater in downtown Los Angeles. Monique moved to Los Angeles from Mexico city over a decade ago and has had several successful fashion and beauty companies. Versa Swimwear is her latest creation and already getting noticed throughout LA and elsewhere. The fashionable crowd included models and entertainers who all came out to support the children’s charities the gala was held in honor of. The evening featured a fashion show as well as pop-up boutiques from several designers and live entertainment throughout the night. The show opened with a magic performance that got people thinking about the upcoming Halloween weekend. A crowd favorite was the levitating card trick which had audience members cheering as the magician slowly brought the cards into the air.

Versa swimwear opened the fashion show with a dazzling sequin bikini. The show continued with several unique reversible swimwear pieces in a range of fun colors and styles. The collection was definitely on trend with several cutout looks and high wasted looks. One of the most creative and stylish looks was this yellow swimsuit with fun bows and a silhouette reminiscent of a retro 50s swimsuit. The designer Monique walked the stage with her last model for the enthusiastic crowd at the end of the show. She has been designing for several years and always hopes to set trends with her collections. Versa has been on the forefront of swimwear trends being featured in Style fashion week as well as other prominent events.

The audience was also treated to several live performances throughout the night by several talented artists. One of the performers was singer and songwriter Jayme Claire who was wearing a sparkling gold gown created by one of the featured designers. We also got to see a performance by American Idol performer Frankee Razor who also made a fashion statement with his look for the night.

The gala night turned out to be a success with guests enjoying great music and fashions while supporting a good cause.