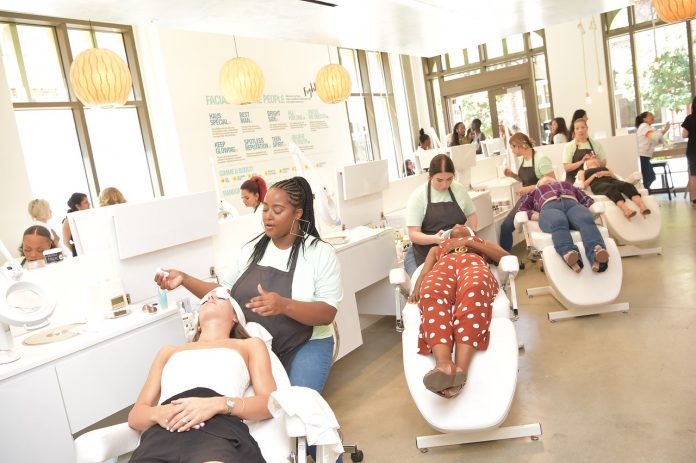 The newest Facehaus shop threw its grand opening party in LA on Saturday where guests and celebrities from all over came to experience skincare for the people! Everyone was having a great time at the event trying out the free product samples including eye and lip treatments. There was even a selfie station where people could show off their glowing skin after getting a treatment! Skincare is a trending topic in the beauty world and maintaining healthy skin is good for everyone, not just celebrities. The opening day was all about showing customers that skincare could be easy and accessible.

The founders of the Facehaus brand came out to the event and gave an exclusive interview to Hollywood Glam Magazine. They shared their vision for the brand as well as some exciting new updates coming up in the near future!

Nick Viall of the Bachelor Season 21 also came out to get a facial and check out the new space. He had a great time posing with the USC cheerleaders and talking with the founders of the brand as well. The USC village location was all on theme with USC logos and cheers posted around the shop. This location is perfect for students looking for a quick glow up before an event or just to renew and refresh after a stressful midterm season. Students were already wandering in to check out the new shop on the opening day, so it will no doubt be a popular location.

According to the founders, the brand was inspired by their teenage daughters who wanted facials to keep their skin clear. The founders knew they couldn’t afford to take their daughters to luxury day spas all the time, so they decided to create their own facial store. According to the founders, they decided to do some homework and were shocked to find out that the average cost of products used in facials was between $3 and $5. They said, “the more homework we did, the angrier we got. And we realized that there wasn’t a place in the market where everyone in the market could go and take care of their skin.”

“It was 2013 when the single service business model was just starting to explode. Drybar was just taking off and we were like: that’s what needs to exist, a dry bar for your face. What if we stripped out all of the overhead and all of the fluff that doesn’t help your skin.”

The founders talked about their unique approach to skincare saying, “there’s a place in the world for a luxurious day spa but this is a maintenance like how you would get a haircut, or a wax. This is a place to include everyone like men, or teens, or busy working moms like us, or even moms who aren’t working but who just want to be smart about their money.”

They talked about the next steps they took to take their business from concept to reality saying, “Dawn and I are third partner had both been going to the same dermatologist Harold Lancer for many years and over the course of knowing him we had seen him become a celebrity dermatologist. He’d seen Oprah, the Kardashians, all these famous people, and we saw him grow from like a hole in the wall office in South Beverly Hills to a brand name. So, we went to him and said we had this idea and it turns out, he had just seen Orpah and Maria Shriver at an event, and they had said to him: “Harold, you need to do something for the people, you’ve become too fancy. And we came in with our idea, facials for the people, so for him, it was this lightbulb moment and a different outlet for his products to reach people besides his Beverly Hills clientele. So, we brought him on as our consulting dermatologist and he designed a specific facial for the shop that drastically reduced rate than what you would pay if you went into his Beverly Hills clinic.”

After their initial collaboration went so well, the founders told me that they have been working with Lanser to continue to develop more products and said there was more to come and the new products would be very exciting!

They continued telling me the story of their business saying, “Then studio city opened and it was actually working, we had 30% men and tons of teenagers, and the demographic we had hope for was actually showing up. So, then we opened West Hollywood and over the next year we really refined the concept and we were courted by various suitors, some of them a little greasier than others, and at that point it was who was going to help us grow this because up until that point it had been just us and friends and family. So, at the end of 2017 we were approached by a fantastic group, the group that grew bliss spas out of one location, and many other successful beauty brands so we closed the deal in January and since then have been moving 150 miles an hour.”

The founders told me how they had worked to refine the brand and grow the ethos saying, “I think it’s become so much stronger, especially this last year sort of our vision for what the brand is. It’s more than just being a skincare bar, it’s a revolution and it’s a community. It’s an open concept and that’s what’s different about us. There’s no private dark room or tip toeing or whispering or creepy music. Its cool and people wanna throw parties here. It’s a communal space and with that openness comes an open mindedness hopefully. Our staff and our clientele are all so unique and it spans age ranges and that continues to be the case in all of our locations.”

They excitedly told me about their future business plans for growing the company saying, “We’ll be opening locations in LA and New York as well as other cities over the course of the next 12 months.” They shared that as their brand has grown they have started receiving messages from teens all over the country in places like Austin or Atlanta requesting more Facehaus locations.

“Our goal is world domination’, they said only half joking.

They also spoke about some of the products they use in their stores and told me about their sunscreen brand saying, “We’re religious about it. That was a huge thing for us, in the beginning, is everyone leaves with sunscreen. We don’t want anyone going out unprotected. All 3 of us have skin cancer in our family. Our sunscreen partner is fantastic, it’s called Suntegrity and it’s a full physical block, no chemicals. It has a female founder and she lost her mom to skin cancer which is what inspired her to start the brand. And you want to be guarding your skin from the sun but not introducing harmful chemicals so we love this brand.”

Finally, they gave a sneak peak of their plan for world domination saying, “The two manhattans are next. Manhattan Beach will be opening soon and there will be one in Manhattan, New York. And at the end of 2018 we have some new and exciting product launches coming out, so stay tuned!” 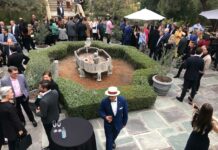 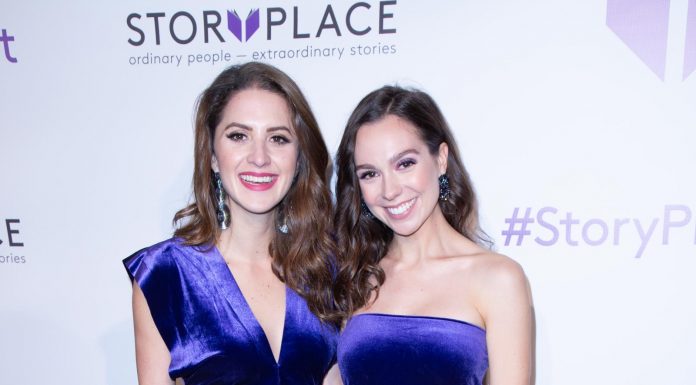